Innovation in the tri-state region

On November 2, 2016 CEO Michael Knapp gave the keynote speech at a Hannah Grimes event for local entrepreneurs in Keene, NH called Connect 2016: Heart of the Start. Below is an edited transcript of his speech.

Thank you to the folks at Hannah Grimes, and all those who attended Connect 2016. 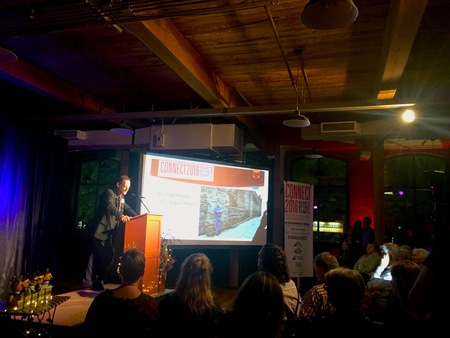 My Dad is turning 90 next month.

People have called his generation "the greatest generation any society has ever produced.” My Dad served in the 82nd airborne in world war 2. His unit fought the battle of the bulge. His generation fought back intolerance, hatred, and death on a scale that is almost unfathomable and triumphed against unimaginable horrors.

We owe that generation so much gratitude and respect.

But looking ahead, the youngest people in this room face a struggle that is as daunting as was the rise of totalitarianism and global wars a generation ago. Over the last few decades, "human societies have come to comprehend that they are depleting resources at unsustainable rates, spreading dangerous pollutants, undermining ecosystems, and threatening to unhinge the planet’s climate balance” (Worldwatch Institute). The degradation our planet's ecosystem, and its inability to support an exploding human population, is at the core of the struggle we face today.

Why did this happen?

"An unfettered pursuit of money rules. The service of the common good is left behind. Once capital becomes an idol and guides people’s decisions, once greed for money presides over the entire socioeconomic system, it ruins society, it condemns and enslaves men and women, it sets people against one another and, as we clearly see, it even puts at risk our common home.”

So we gather here, in Keene NH, not far from the major cities of the northeast in the world's largest economy. Clearly, we too are some part of a capitalist system that seems hell-bent on destroying our planet.

And our wonderful hosts, the Hannah Grimes Center and the Keene Sentinel, put on this event to celebrate and to nurture the entrepreneurs in all of us.

But isn’t entrepreneurship the unfettered pursuit of money Pope Francis was railing against?

I am here to tell you no, and to say that in this place, at the intersection of Massachusetts, Vermont and New Hampshire, we have the potential to forge a different model for capitalism. One that is radically transparent, and one that is devoted to creating a sustainable, just society. We are here to create a capitalist model to foster social justice, at scale.

How do we do this?

It begins with the arts. As Machina Arts has shown us here tonight.

It begins with local, sustainable agriculture. As Free Range Chick catering has shown us here tonight. They provide an example of how to enshrine a regional food system.

And of course, it begins with tourism. The hospitality industry in New England has built their very businesses in reverence to our outstanding natural spaces.

In fact, the G77 group of developing nations from the UN traveled to this region in September for a retreat on environmental sustainability. The Thai delegation, current leaders of the G77, spoke about how much healthier our food is, and how, in a nation of consumers, our carbon emissions per capita in this region are half the U.S. average. The G77 could have gone quite literally ANYWHERE else, but they spent a weekend in our neighborhood.

Something IS different here.

But how do we extend this something that’s different about us from our successes in tourism, in agriculture, in arts, to other sectors of our economy?

Let's take a look at my field, the software industry.

As we see from the archetypes in so many of our favorite Disney movies, life can be seen as a struggle between good and evil. Any invention, any technology, can be used for harm or for good. If we’re going to use our information technology to create a more ethical and sustainable society, I want to prove to you that effort belongs right here.

Not only are we supposed to thrive in the face of competition from the urban tech centers around the nation, but we’re supposed to be the ones to make sure emerging technology is used for good, not harm?

While Jeff Bezos at Amazon can take pride in having taken over the world of e-commerce, and our colleagues in urban tech centers in Austin, Silicon Valley, and Boston strive to make the next big tech startups, investors scramble to hit the lottery with staggering returns on venture investments.

OK, a bit about my company. Green River creates custom software for environmental protection, public health, and a sustainable ecosystem. The eighteen committed individuals working at my company Green River have something very different we can brag about.

One of our clients is GRESB. For GRESB, the software Green River wrote is used to create environmental, social, and governance reports. For example, if the California Teacher’s Pension Fund was deciding how to invest in real estate, the GRESB reports provide important non-financial metrics the pension fund would use to make their decision. The GRESB platform is used to report on almost 3 trillion in commercial real estate. To give that number some context, that’s about five times the market cap of the world’s largest company. It’s about half of the amount of all gold mined in the world. But this isn’t about money for us. While money is the fuel that makes the company run, the purpose of the work is to make buildings (the built environment) a lot more sustainable. It’s about climate change since heating buildings accounts for almost half of all carbon emissions.

Starbucks is another client of ours. Green River’s platform is used to certify 2.5 billion pounds of coffee, 100% of the coffee Starbucks sells. Our data system is used to ensure Starbucks is sourcing sustainably grown and processed coffee by evaluating the economic, social and environmental aspects of coffee production. This is an analysis of ~ 15% of all coffee grown in the world, and millions of lives have been touched by this project. Money for our company––fine. But it’s not about money for us. It’s about getting a farmer a raise of 25 dollars a month for her grueling work on a coffee plantation in Panama. It’s about ensuring that 5 million workers in developing countries whose lives this project has touched are receiving fair wages for their labor.

People in this region constantly complain about how difficult it is to recruit great talent. In the tech industry, it is notoriously hard to to find talented labor. We are all tripping over one one another in search of the best talent. But I haven’t found that.

“Can I be Honest…. I want to do work that I find meaningful -- work that promotes good in the world yet still supports my family. .... It seems to me that you've found a way to do good in the world and make a living, and I admire your commitments to continue to find that kind of work. I see a wonderful balance, and I would love to belong to that kind of organization and contribute to your mission.”

I don’t kid myself into thinking the broader investor community necessarily has the same values as the people who work for my company. Like many of my friends and neighbors in this region, we care about equal rights, wages in developing countries, education of children, climate change.

The cocoa industry may or may not value women’s rights, child labor concerns, and other social issues in West Africa. But it’s clear they don’t want chocolate bars to cost $10, and if they don’t invest to improve conditions in West Africa, their supply chain will collapse. Investors still maintain that single-minded focus on the ROI Pope Francis decries. So why are investors using our data systems to make their decisions? Our numbers are measures of management quality. I may care that a hotel chain swaps its incandescent bulbs for LEDs because the hotel uses less electricity, thereby reducing carbon emissions. But for investors, it may not be the energy savings or carbon issues that are important: the hotel chain that swaps out the bulbs is probably better managed, thereby making it a better investment. We’re at an incredible moment in the evolution of capitalism where the investment community’s priorities perfectly align with a new economy’s objectives of efficiency, transparency, equity, and yes, even social justice.

This is a moment in a shift to a new economy that we, the entrepreneurs developing new businesses in this region, are well positioned to grab.

Turning from my company to the entire region, and other parts of the economy, I want to conclude by highlighting an initiative that began in this region about a year ago. It’s grown to over 100 businesses, educational orgs, investors, consultations. We’re meeting to talk about what we’re gonna do about the economic disruptions coming as a result of the closure of Vermont Yankee.

It’s an initiative to focus the region's economic development on a collaboration to foster
environmental protection and green building. Our vision? Become a recognized national leader in creating resilient, sustainable buildings and communities. Instead of 600 jobs lost when Yankee closed, the Ecovation Hub sees 60 new businesses and 6,000 job openings in the new economy.

In other words, in a shuttered nuclear plant, we see the heart of a new start.

I used to be ashamed to admit that I LOVE business.
Now I love that I turned out to be an entrepreneur.
The reason? I don’t know how else would I get to be part of such an amazing team, living in an amazing community, and working on projects touching so many people in positive ways.

Most importantly, We’re entrepreneurs because our talents demand something greater of us. LET US CELEBRATE THE entrepreneurial spirit that IS GOING TO make all this HAPPEN.