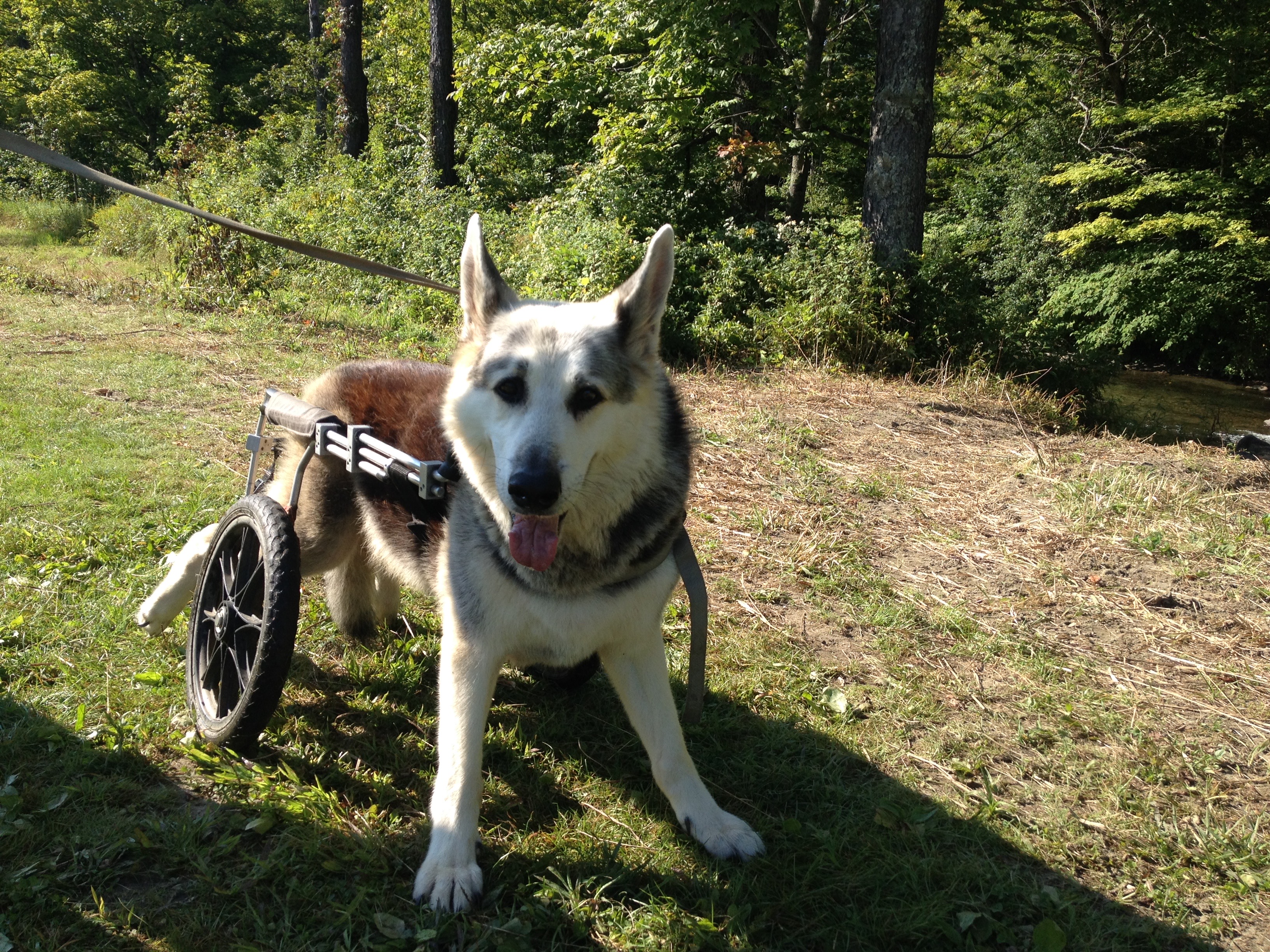 Sheppie enjoying a walk in the meadow

When I moved to Green River, Vermont, in 1994, my house overlooked 48 acres of conserved river bottom. I dreamt of spending all my time working the land to grow the food my family and I needed and to create my own personal “Biosphere version 3” — a high-tech self-sufficient homestead!

But then, in 2000, I founded the software company Green River, and as a CEO, I found there was far less time to fulfill those early dreams. Although I never did get around to homesteading, the dream evolved into my hobby: taking care of the meadow and shepherding it into the future. Speaking of shepherds, I named the meadow after Sheppie, my neighbors’ majestic German Shepherd. During the last years of his life, Sheppie lost the use of his back legs, but a custom-made appliance allowed him to continue to enjoy his daily walks in there.

These days I actively manage Sheppie’s Meadow for a variety of uses (farming, recreational enjoyment, wildlife), as well as to help maintain the ecological diversity of Vermont’s native grassland plants. A large part of the field serves as a site for growing hay to feed beef cattle for my neighbor Ron Cutting, one of the few people still farming in Guilford, VT. Ron has been doing a fantastic job caring for the meadow by adding cow manure, removing debris after floods, and gladly sharing his hay with the deer who visit all summer. By mowing the field, Ron not only provides food for his cattle, but also prevents trees from taking root, thus enhancing the area’s biodiversity.

Sadly, grasslands like Sheppie’s Meadow are disappearing rapidly in the northeastern US. During the 1800s, when the land was being cleared for farming, such fields were abundant. But today, Vermont’s grasslands are shrinking rapidly as farms revert to forest, and meadows like this one are being lost as a result of technological changes in agricultural practices, the western migration of farming communities, and the increased population. 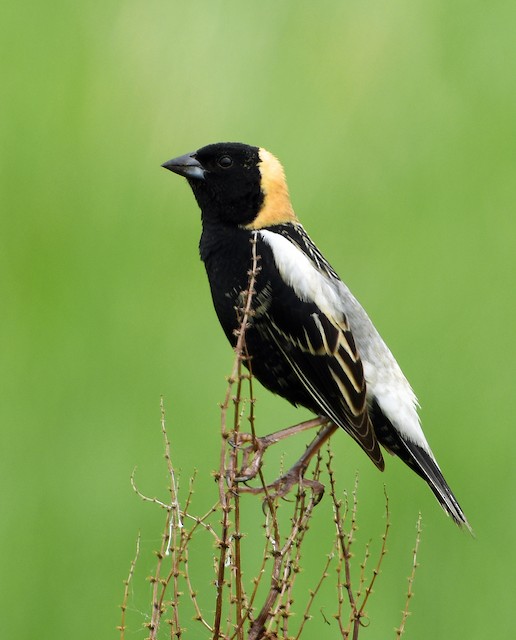 Grasslands are home to diverse types of wildlife: mammals (such as fox, deer, black bear, the occasional moose, and lots of rodents), butterflies, and birds, including some of our rarest avian species. Bobolinks nest in fields like Sheppie’s Meadow — an important point, because Vermont suffered a staggering decline in their number (75%) between 1966 and 2007. Because bobolinks require large, contiguous patches of grassland for successful breeding, the timing for mowing a hayfield is crucial to the survival of this species, as well as that of all birds that build their nests in such habitats. Frequent mowing at the start and throughout the growing season will destroy both the nests and the young. Therefore, farmers should postpone the mowing of grasslands until after August 1 so the offspring of threatened bobolinks and other grassland-nesters can safely hatch, fledge, and depart. (To learn more about conserving grassland birds, visit the Vermont Agency of Natural Resources. Also, the innovative Bobolink Project provides grants to Vermont farmers who delay mowing until the nesting season is over.)

Below is a list of the types of birds observed in Sheppie’s Meadow in the spring and summer of 2017. During two, hour-long visits, Cat Abbott of the New England Grassland Bird Resurvey Project at the Vermont Center for Ecostudies logged 28 different species of birds in May and 24 species in July. Many of these birds are members of a class known as aerial insectivores (birds that feed on the insects they catch while in flight), and they are in trouble. For the past 25 years or so, the population of aerial insectivores has been declining steadily in the Northeast. One important attribute of Sheppie’s Meadow is that it offers a habitat for these endangered birds.

Unfortunately, during Hurricane Irene in August 2011, many of the young trees we had planted were washed downriver. 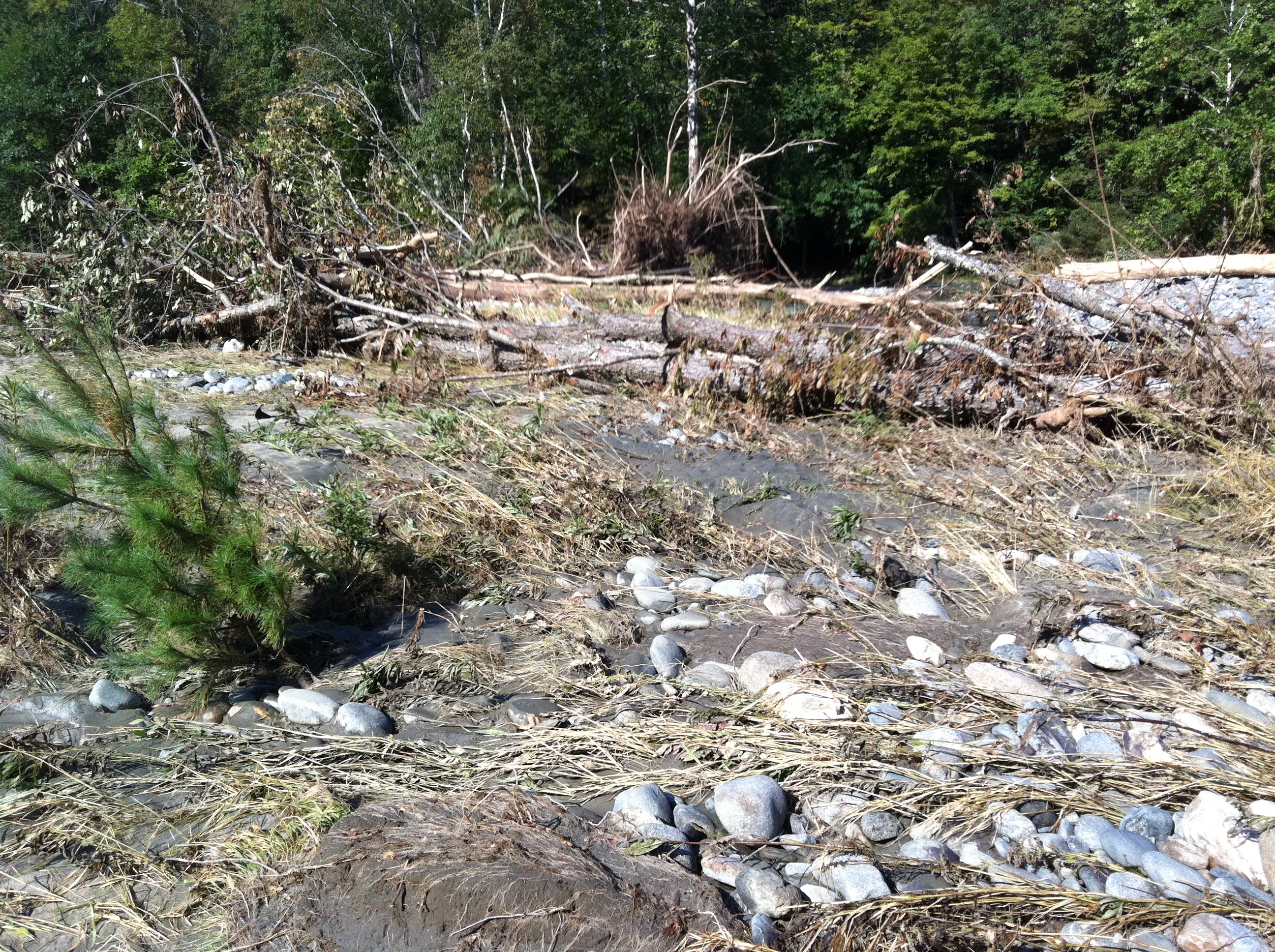 Damage to the meadow from Hurricane Irene. Rocks and sand from the washouts on the road were deposited over the topsoil. Extensive man-made and natural debris was also deposited, and trees uprooted.

Subsequent high levels of rainfall appear to be more frequent, and State of Vermont meteorologists note that climate change is the most likely cause of these devastating precipitation patterns. Because of soil loss from Irene and more recent storms, trees continue to fall into the river, including the wild apple trees that grew along the riverbank. These apple trees are an important food source for the local deer population, so those trees which remain along the east side of the meadow, opposite the river, have been pruned to encourage a higher yield of apples. In addition, soil erosion in the middle of the field was greatly exacerbated by the hurricane, and several acres of topsoil have washed into the river as it shifted its course into the meadow.

We are witnessing the problems that attend ongoing, significant soil erosion. During rainstorms, the rivers and streams turn dark and muddy as they carry away the soil, and the resulting silt smothers the fish eggs in the streams. Topographic features, the lack of vegetation uphill due to human activity, and our steep dirt roads all contribute to the damage done by soil erosion in this valley.

The beautiful Green River crib dam next to the covered bridge exacerbates the loss of soil in the middle of Sheppie’s Meadow. 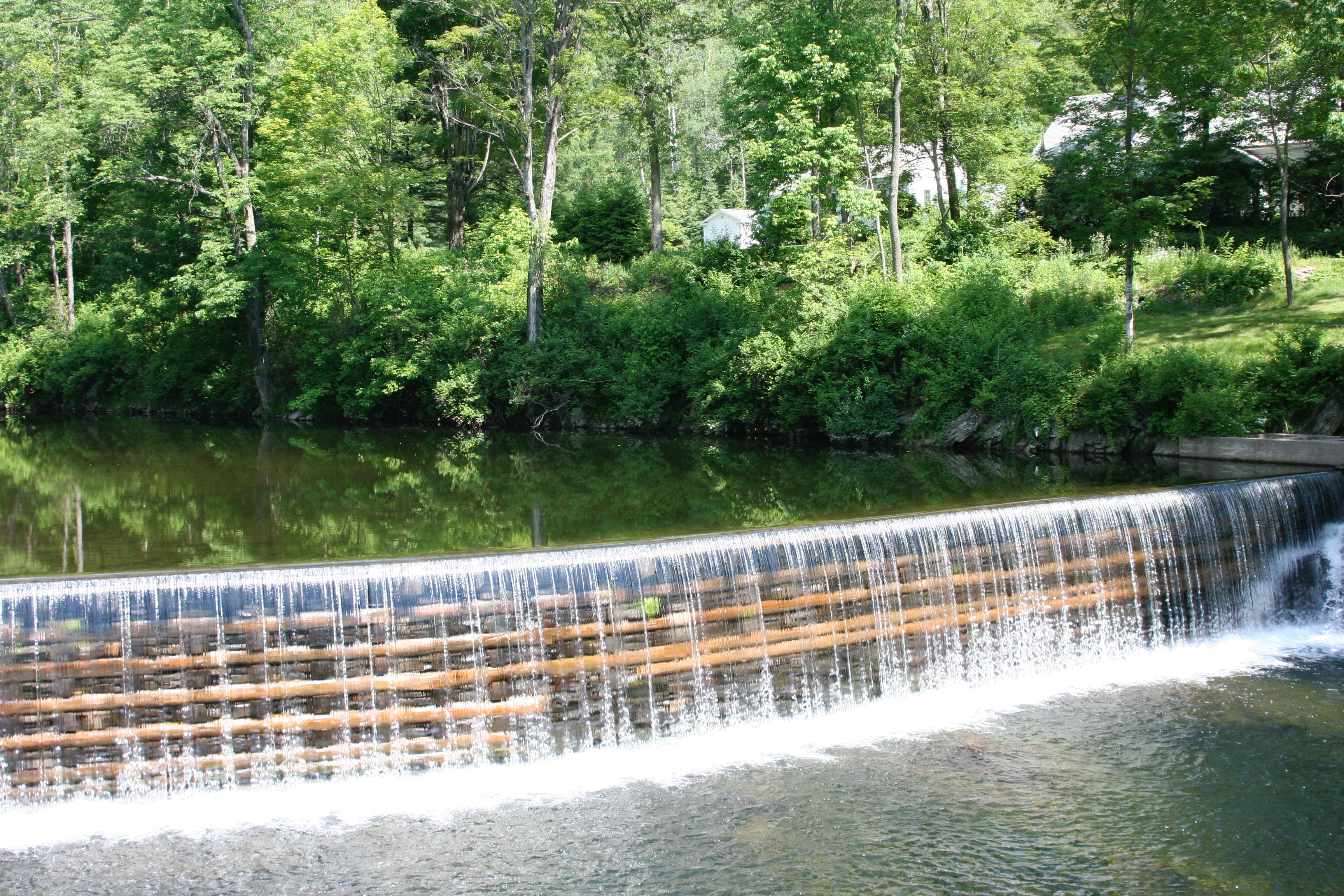 The Green River dam was used to power furniture mills in the 1800s, and was fully restored in the 1990s. It is appreciated by the neighborhood as a great swimming hole! 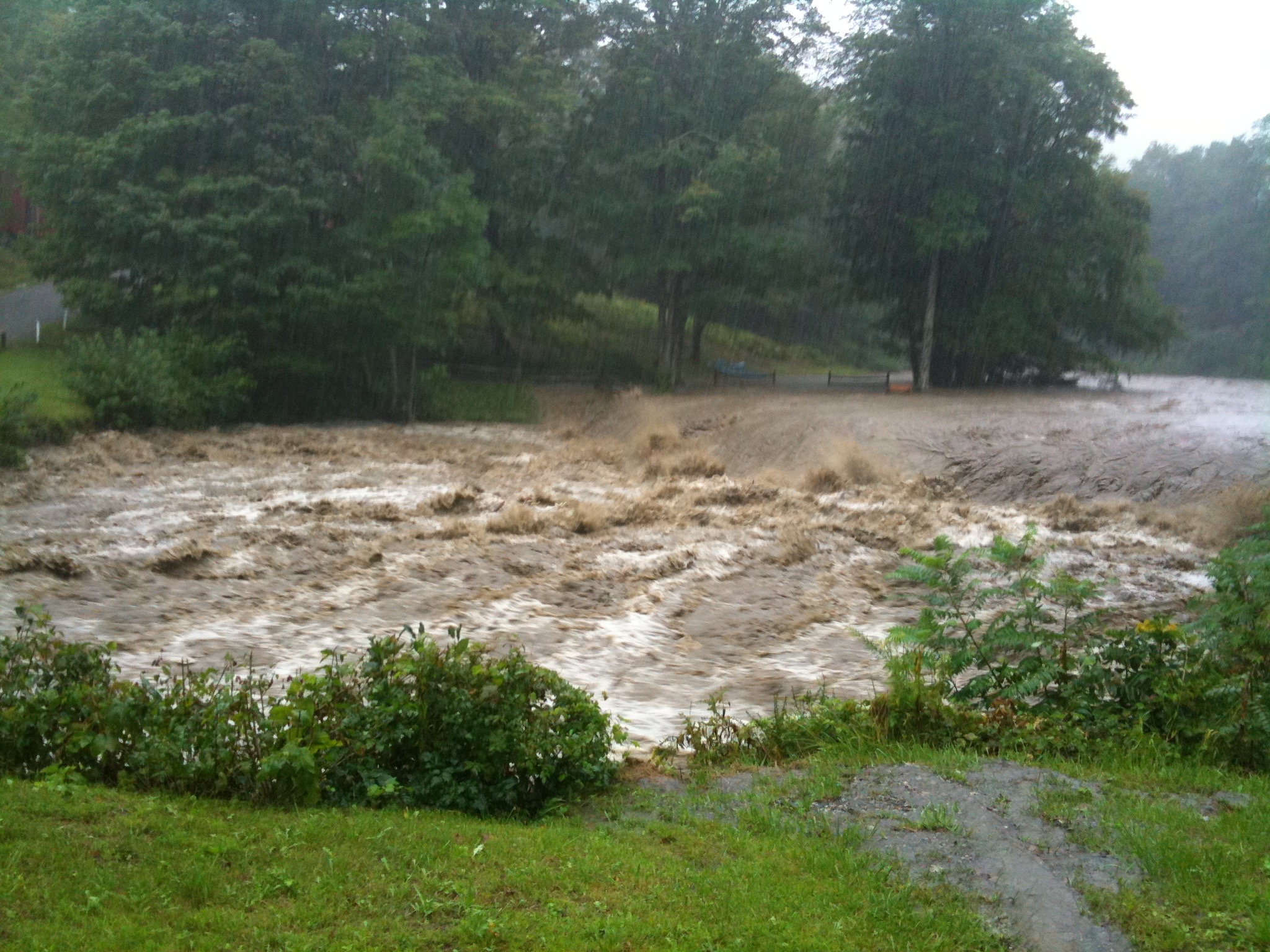 This is the same dam during hurricane Irene. The loss of forest cover from the river banks combined with periodic major rains from climate change, results in a very dynamic river.

All rivers contain sediments. In fact, a river is in effect a body of flowing sediments as much as one of flowing water. When a river is stilled behind a dam, these sediments sink to the bottom of the reservoir, removing the sediment load normally found in a river flow. After the river flows over the dam, its downstream velocity increases again, but now the water has been deprived of its sediment. In order to make up for these lost sediments, the rushing water erodes its channels and banks, threatening to cut the meadow in half. 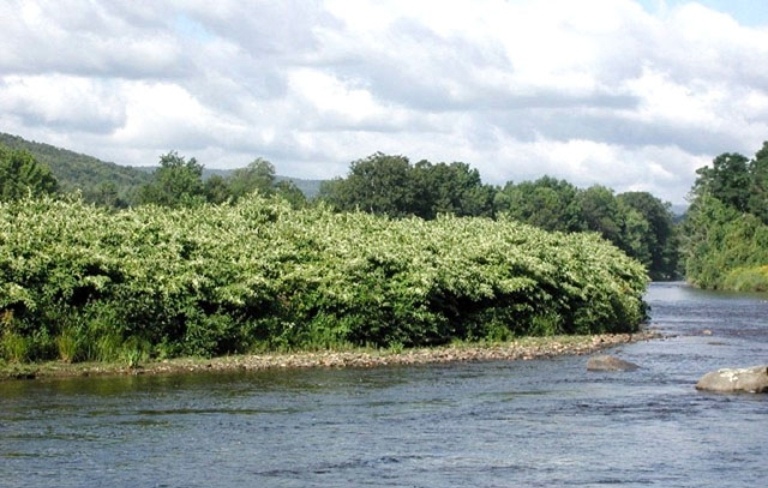 Another major problem facing the meadow — and the Green River valley in general — is the spread of invasive plants over the past couple of decades. Often these plants were introduced to the area for landscaping our yards, but as it turned out, they are causing considerable environmental damage. The presence of non-native invasive plants, including honeysuckle, barberry, knotweed, multiflora roses, and buckthorn, competitively displaces native species, altering community structures and functions by disturbing water, energy, nutrient, and other natural cycles, which may cause loss of biodiversity and exacerbate soil erosion and habitat degradation.

Invasive plant control on the meadow has been practiced actively for a decade and is an ongoing project. Unfortunately, the presence of these invaders on adjacent plots of land throughout this valley means that all our neighbors need to participate in controlling such growth to prevent these harmful plants from being continually reintroduced into this field.

Poison ivy, although a native plant, has also invaded this field and continues to dot the area despite our efforts to actively remove and control it. The good news is that acres of poison ivy have now been removed. However, recent evidence suggests that one reason for the dramatic increase in the prevalence of poison ivy is the rise in carbon dioxide in the atmosphere due to greenhouse gases. Poison ivy loves the carbon dioxide emitted from cars, planes, and homes, and we continue to feed it heartily!

View of the meadow in the late fall the hydrangea hedge planted by Fraser, Corso, Tommy, and Nick on both sides of the farm road.

As part of a Wildlife Habitat Incentive Program (funded by a grant from the US Department of Agriculture), we planted 1,200 native trees and shrubs along the Green River on the west side of the meadow, and in the narrow middle section of the field. Such plantings were designed to help prevent soil erosion and also provide shade for the river, allowing the water temperature to remain cool for the resident trout. The alignment of trees and shrubs also constitutes a protective corridor for birds and other wildlife. On either side of the farm road you can see rows of hydrangea bushes planted by Fraser, Corso, Tommy, and Nick as part of an agricultural project begun by our neighbors Nina Beckstrom and Rob Goldenhill. In addition to being a beautiful feature of the field, these and other bushes serve to outcompete the invasive honeysuckle and barberry that would otherwise be encroaching on and taking over the edges of the field. 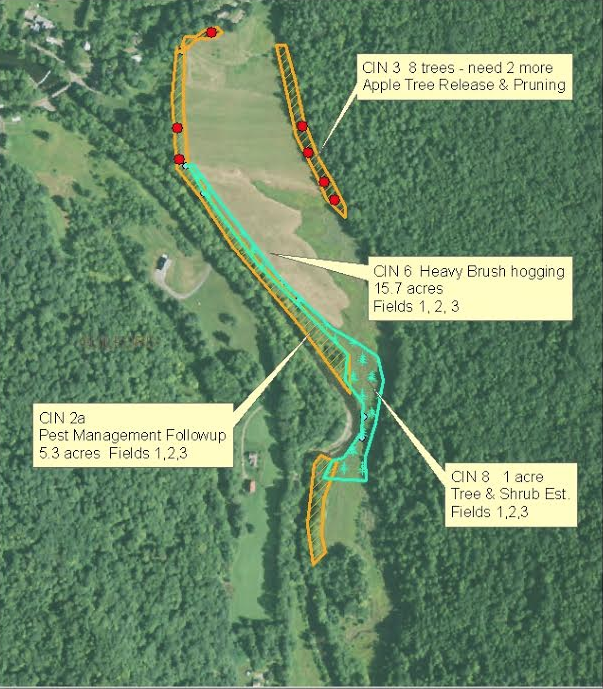 The management of the meadow for wildlife includes more than the planting of trees. The management plan, developed in collaboration with Mary Beth Adler, a Field Technician at State of Vermont Fish and Wildlife Dept., included eradication of invasive plants using herbicide, tree planting, and delayed mowing of the field to prevent harm to the Bobolink population.

My wife Laura and I have owned Sheppie’s Meadow for 24 years. It has been a privilege to take care of this beautiful site, and I am thrilled that neighbors Addie and Addison Minott decided to conserve the field through a land trust prior to our purchasing it. This means it will be here to bring joy to all of us — including the wildlife that inhabit this area — for generations to come. 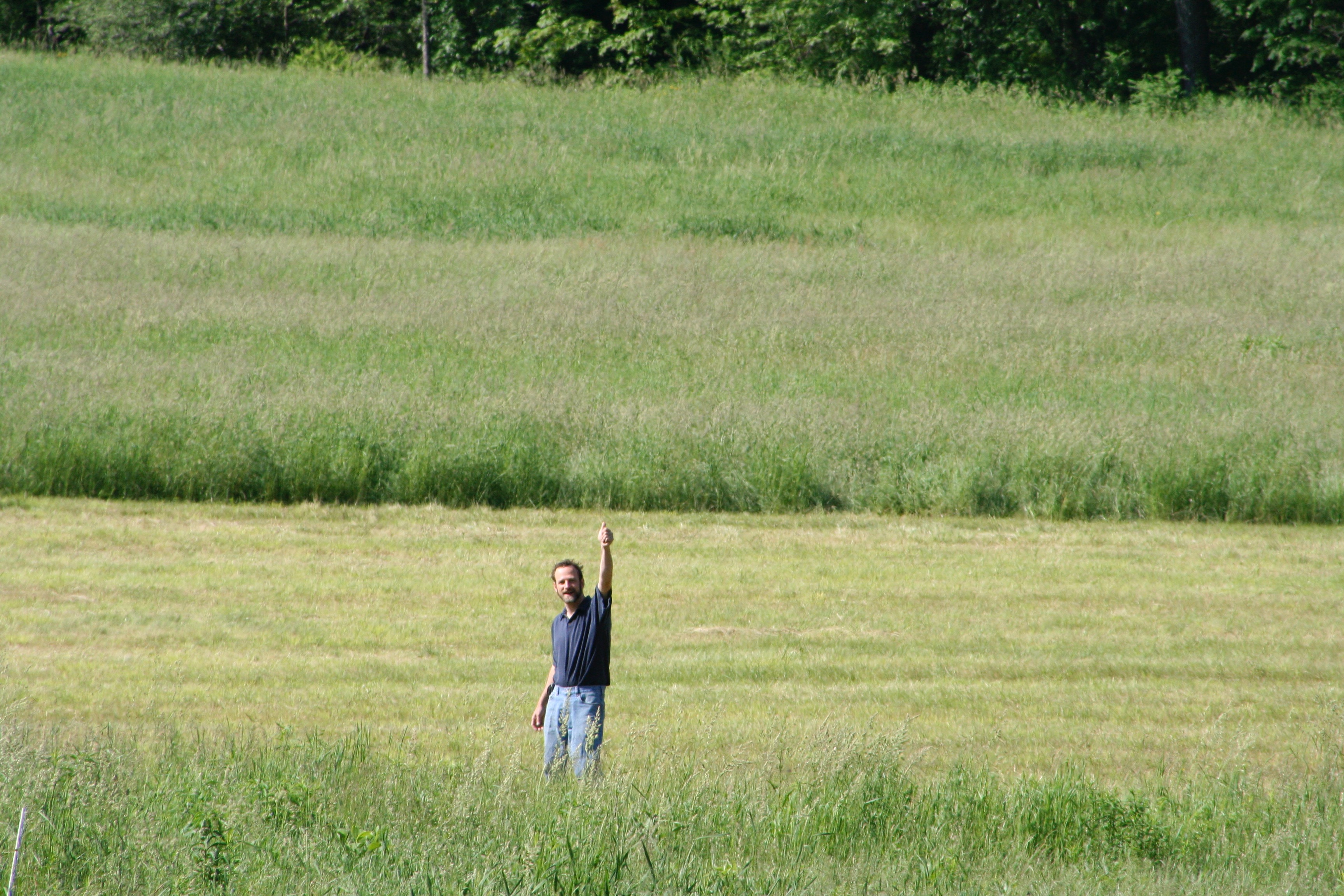